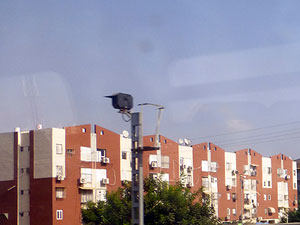 Lod is a city twenty kilometers southeast of Tel Aviv, next to Ramla, Rishon LeZion and Rehovot.

This is one of the oldest cities, which has a rich history. It was repeatedly destroyed as a result of wars and earthquakes and rebuilt again.

In the fifth century BC there was a city called Lidda, the center of Jewish scholarship. During the Second Jewish-Roman War, the city was destroyed by the Romans.

Lidda was one of the centers of the state of the Crusaders.

In the early twentieth century, thanks to the construction of the railway, the city turned into a traffic junction.

The city has a large industrial zone.

Near Lod is the airport Ben-Gurion.


City streets and attractions near the city:

City streets and attractions near the city:

Israeli Settlements in Judea and Samaria

Religious Cities and Villages of Israel

Distances between Cities and Villages

The Health Care System in Israel

Hospitals and Medical Centers in Israel

Cities and Villages of Israel

Traveling in the Holy Land

The Antiquities of the Land of Israel